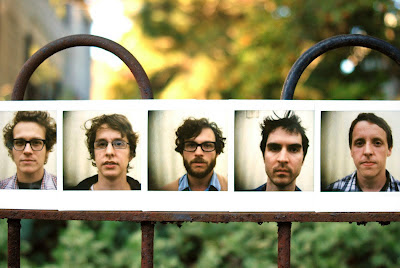 So anyone paying attention to the radio show or podcast knows I absolutely adore The Spinto Band. Their latest release Shy Pursuit has generated two of my favorite tracks so far in 2012 "Keep Them Alive" and "The Living Things." My love for their infectious pop is akin to going to the refrigerator, seeing the cake, telling yourself you will have just one forkful, then sitting on the couch and devouring the whole thing. I must have listened to "Keep Them Alive" fifteen times in a row when I first heard it.

I was a bit scared that The Spinto Band would never agree to answer a 7 Silly Questions interview. To contact them I had to go through a mutual friend that works for their radio promotion company. Once I found out where they were, the hunt was on. Most of the band members were too quick and nimble to for me to catch. Thankfully, Nick Krill stumbled while trying to get away and he agreed to answer our highly dubious questions.

What's the most embarrassing band you loved as a kid?
Krill: Hmm, actually I think the moment that is the silliest is when I was a teenager and I thought The Beatles stunk. I grew up loving them as a real little kid...and then of course when I was a full fledged "teen man" I turned my back on all the music I dug when I was little. I have a moment burned in my memory of being 12 or 13 and putting on Magical Mystery Tour just to give it another shot....and then turning it off right away and thinking, "man how did I ever like this stuff." I am more embarrassed by that moment than by any band I listened too back then. Luckily by the time I was 15 I came back to my senses and started listening to The Beatles again.

What is the first record you bought?
Krill: The first might have been a compilation LP of the theme songs from all the James Bond movies.

Unicorns vs. Narwhals? Who would win in a fight?
Krill: Probably narwhals. I am basing my decision on the logic used in the movie "Mortal Kombat Annihilation." At the end of the movie the mortals had to fight some sort of fantastic god-like being, and in the end, the mortals won. To me, unicorns represent a super natural god-like creature, and then the narwhals would be the mortals that actually exist. So if "Mortal Kombat Annihilation" taught me anything, it is that a narwhal would probably win that fight.

What is the funniest thing that has happened to you on the road?
Krill: We once left for a tour only to realize that bees had made a hive in one of our van seats. About an hour or two in to the drive, bees started coming out and flying around the van stinging people. We eventually had to stop the van and dismantle the seat to find the hive and remove it.

Who has the worst van etiquette?
Krill: I think we all probably have little quirks that piss each other off. For me, if something isn't causing anyone harm I let it slide because I know I am probably unconsciously doing something dumb that irks the other guys, you know? In the end...you gotta do whatever keeps you sane on tour.

Who is in heavy rotation on your iPod?
Krill: I have been listening to The Penguin Cafe Orchestra a lot. Also, a few compilations of songs recorded by producer Joe Meek have been getting a lot of spins.

What is the worst fight over nothing that you got into with each other after being road weary and exhausted?
Krill: Nothing specific is coming to mind, but my guess would be that any argument would have been over where or when to stop for a bite to eat. We all get a little "hangry" when we have not eaten anything in a while.