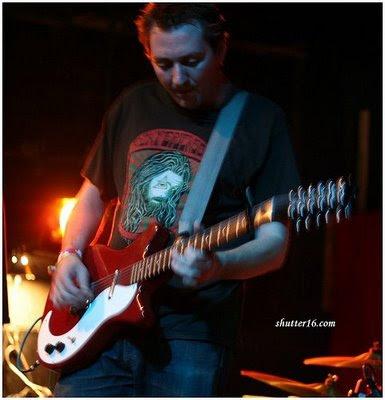 I had never been to Charlotte's Tremont Music Hall before. It is an all ages venue that starts shows pretty early and seemingly tries to get everything over with by midnight. LA Tool & Die took the stage at 9:30 and for the next 40 minutes rocked the place with a live show that was almost anthemic in nature and far surpasses anything I have ever heard on their recordings. Opening with "Jesus Saved Me at the Record Show" was quite entertaining considering the songs lyrics include, "I saved Elf Power and I'll save you." They played a couple of songs I don't think I've heard before, most notably, a number that was reminiscent of mid-90s freak rock with Boss Hog-like interplay between Lee & Emily. Emily sings, "I'm going to touch your mustache." Lee replies, "Don't touch my mustache." By the way, though cheesily funny, Lee sings the song using a unicorn hand puppet with a giant goofy mustache attached. "Bleep and a bleep and a bloop is all I have to say to you." They closed their set with a thunderous version of their 7" song "1983." 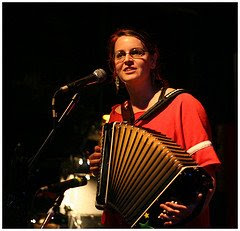 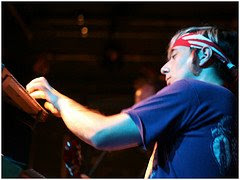 Elf Power got on stage around 10:20. Thier line-up was leader Andrew Rieger, Jimmy Hughes on guitar and some keyboards, Derek Almstead on bass, and their amazing drummer Eric Harris. A majority of the songs they played seemed to be from their more recent albums Back to the Web and In a Cave. Live they were really, really great. Very gutty and gritty and full of oomph. I thoroughly enjoyed every second of it. Watching Derek Almstead's intricate work on bass in a live venue was a real treat. The sound system at Tremont was exceptional and you could really feel the bass move right through your body as Derek expertly drove the songs along. Also, Eric Harris blew me away with his constantly changing, intricate patterns on drums. One of the best drummers I have ever seen live. Their set lasted about an hour and highlights included a great version of "Spiral Stairs" and the beautiful, beautiful song "Come Lie Down With Me." 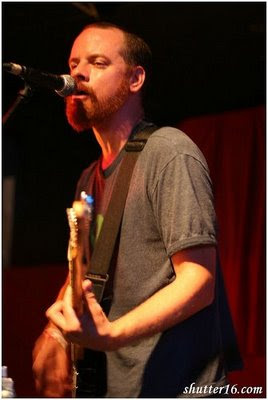 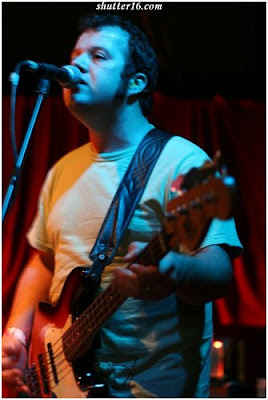 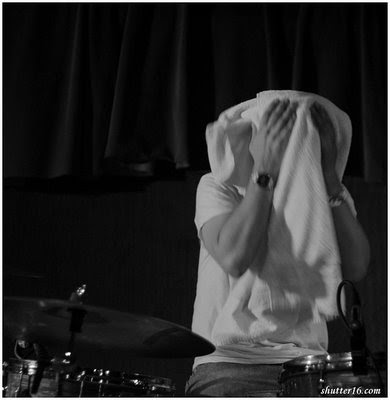 All in all, a great night of music! If you get a chance to see either live, I strongly recommend you do so!
ELF POWER
LA TOOL & DIE
DIANNA AUGUSTINE PHOTOGRAPHY
Posted by Viva Indie! at 7:29 AM 1 comment: 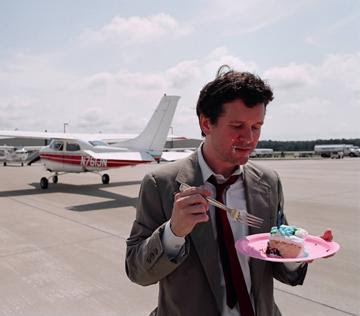 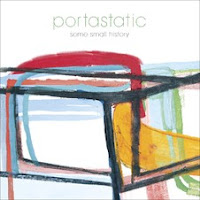 Some Small History is a double-disc of Mac McCaughan rarities, collecting B-sides, compilation tracks, EPs, fanzine vinyl, and previously unreleased material recorded between 1990 and 2007. 44 Tracks on two disks. All of it a delight, especially for those of us who have been around since the heyday of Superchunk and the creation of Portastatic.

Disk 1 is filled with tons of great tunes mostly featuring covers and unused demos. One of my favorite tracks on this disk is the rip-roaring “Trajectory.” According to the liner notes, the demo had a “distorted and good” quality that they could quite recreate when recording it for real. Based on the amazing quality of the demo recording, I can only scratch my head and wonder why they didn’t just throw it on a record anyway. It f’in rocks! “Make You Up” is a forgotten 4-track gem that has amazing lyrical content. “I didn’t have you, so I had to make you up.” Mac’s throw-aways are better than most band’s best efforts. One song I am shocked never made the light of day was “Portraits From Before the War.” According to the notes, this song was recorded for Bright Ideas but somehow didn’t make it. Mac refers to it as coming out “kind of weird.” Weird? Weird?!! Maybe compared to the sound he had in his head, but not to the rest of us.

Disk 2 is a bit more sturdy top to bottom than the first. It starts off with the title track “Some Small History.” You may recall this tune from Old Enough to Know Better, the incredible comp Merge released in conjunction with it’s 15th anniversary. Disk 2 also features the original acoustic version of “Spying on the Spies” from its 7” release in 1996, perhaps one of my favorite songs ever. I am also totally in love with the Galaxie 500 cover, “Tugboat.” According to Mac’s notes, “

we also recorded it in an unusual fashion for us - live, in the studio, including the vocals, which due to my inaccuracy are almost never done live.”

I strongly encourage absolutely everyone to obtain a copy of Some Small History. It goes so far above and beyond a mere compilation of b-sides and rare recordings. It truly is a glimpse into the history of indie rock. For 2 decades, Mac McCaughan has helped to write, mold, shape, encourage and develop the genre through his work with Superchunk, Portatstatic, and especially, Merge Records. I can’t really imagine what indie would be today without his contributions.

The official release date is Sept 9th. But, you can preview all 44 tracks now by visiting http://www.mergerecords.com/.
Posted by Viva Indie! at 2:27 PM No comments: 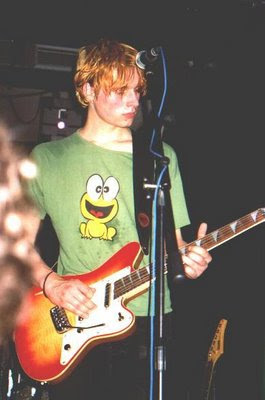 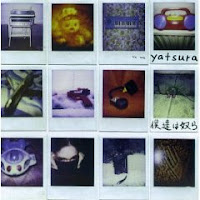 In the mid 1990s, a Scottish quartet with a name stolen from Japanese anime burned up the college charts reigniting kids love for indie pop/punk from the UK. Their unique sound, counter melodies, and fun loving spirit was just the kick in the pants that the CMJ scene really needed. (Back then, the CMJ festival was still worthwhile and not completely overrun by record labels hogging up all the venues spewing out whatever shit they were trying to push on us at the time.) In 1996, UK label Che Records released We Are Urusei Yatsua! Unfortu

nately, due to US Trademark laws, the band had to change the name of both the band and release for US consumption. So, in the states, it was called We Are Yatsura by the band Yatsura. But, who cares, it was the music that matters. Tracks like "Si Amese" featured amazing intricate vocal rhythms with 2 singers dueling out their individual melodies at the same time. It's great fun trying to concentrate on just one or the other hoping to figure out what the heck they are saying. Songs like "Kewpies Like Watermelon" and "Plastic Ashtray" are really fantastic rocking numbers that still manage to maintain a melodic grace rarely found during the time period. If you get a chance, do some investigating on your own! Urusei Yatsura is totally worth it!
YATSURA WEBSITE
YATSURA MYSPACE
Posted by Viva Indie! at 7:31 AM No comments: 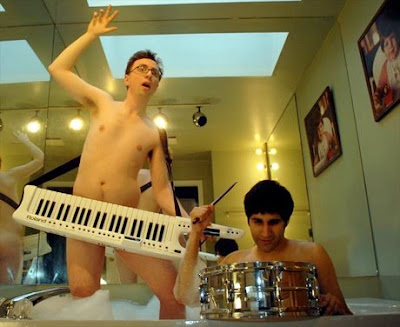 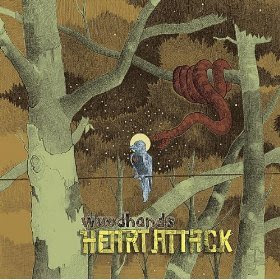 Beware! Woodhands, the infectious electropop goofball duo from Canada, are about to conquer the US one indie rocker at a time! Heart Attack is 10 tracks of sheer delight! Their enthusiasm for music seeps through on every single song and you can't help but to enjoy yourself listening to them as much as they clearly enjoy making the music. Tracks like "Can't See Straight" and "I Wasn't Made for Fighting" will get even the most dour music afficianado smiling. Check these guys out. Now.


WOODHANDS WEBSITE
Posted by Viva Indie! at 6:17 PM No comments: 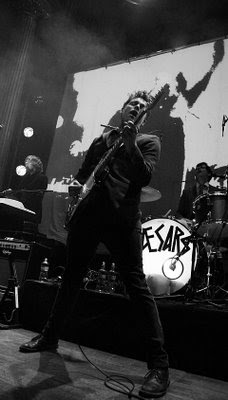 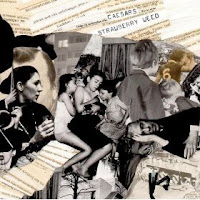 Unfortunate title aside, the new Caesar's record Strawberry Weed is pretty darn good! Let's just blame the title on technical difficulties translating Swedish to English! Unlike their last record Paper Tigers, there is no "Spirit" to focus all of our attention upon. None of the songs on Strawberry Weed surpass the quality of the album as a whole. Rather this time around, the all of the songs are really stong and the overall result is an album far superior to Paper Tigers. My favorite tracks early on are "Waking Up", "In Orbit" (despite them rhyming down with clown), and "Solina." Astralwerks/Caroline are responsible for bringing this album to the US and have released it as an expanded 2 disk set with 24 tracks instead of the original 12. All 24 are worth a listen.

CAESARS MYSPACE
Posted by Viva Indie! at 2:14 PM No comments: 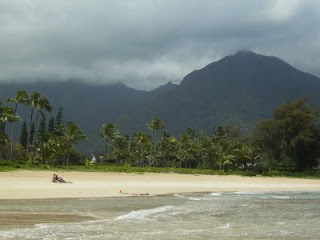 Hey!
Sorry for being gone so long! I got the opportunity to go back overseas and jumped on it like an Emo kid jumps on Jordache Jeans! I will get back to posting again next week!
-Viva!
Posted by Viva Indie! at 11:01 AM No comments: