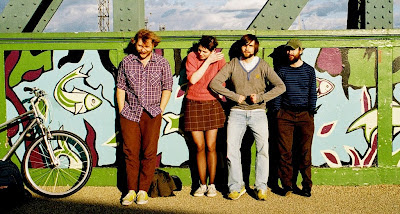 Very few bands make me go squee anymore. The UK’s Allo Darlin’ is one. Since the first time I heard “My Heart is a Drummer” back in 2010, I was smitten. The great news is Allo Darlin’s new album Europe is due out in April on Slumberland Records in the US and Fortuna POP! in the UK. Even more exciting, Allo Darlin’ will embark on a three and a half week US tour staring on April 24th!

Allo Darlin’ is comprised of Elizabeth Morris (uke, vox), Michael Collins (drums, vox), Paul Rains (guitar, vox), & Bill Botting (bass, vox). Their website says, “They are close friends who found each other and the music they make in London.” And it’s lucky for us they did. I caught up to drummer Mike Collins in a seedy men’s restroom and forced him to answer some seriously dubious questions:

Viva: What is the most embarrassing band you loved as a kid?
MC: I guess the first band I loved, when I was about 2, was the Velvet Underground. Luckily I soon realised how embarrassing that was and quickly bought all the Meatloaf records I could find.

Viva: What was the first album you bought?
MC: The soundtrack to the Jungle Book.

Viva: Unicorns vs. Narwhals? Who would win?
MC: I guess it would be a bit weird if they met because if a Narwhal was on land it'd have some pretty serious asthma issues and vice versa for the Unicorn. My money is on the Narwhal. I love marine wildlife.

Viva: Who smells the worst in the van on tour? 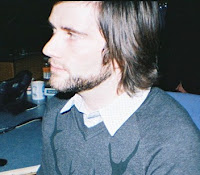 Viva: What is the funniest thing that has happened to you on the road?
MC: Paul Ashley Rains having a rant on camera about tall people and how 'boring' we all were in the depths of Italy.

Viva: A wise man told me never to print anything a drummer says. Is this true?
MC: What sort of wise man? Was he a guitarist? No. Drummers are a rare, beautiful breed; modest, witty, charming and yet aloof. Oh wait, I'm the drummer. Yeah print 'SNOTTY COCK' as my answer.

Viva: Who is in heavy rotation on your iPod?
MC: Jim O Rourke 'Eureka' rarely leaves mine, it's one of my favourite records. I think we all actually end up listening to bands that we meet on tour. Now that I've got my record player fixed I've been listening a lot to Eux Autres - our San Franciscan tour buddies.

*Photos by Niklas Vestberg.
Posted by Viva Indie! at 12:51 PM