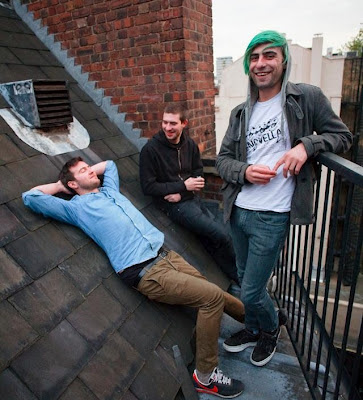 When I told my friend Michael I was going to do a 7 Silly Questions with PAWS, his first reaction was "I want them to tour the US so bad." And he is not the only one. Ever since their promo company started sending out the preview tracks, I fell in love with their sound. More to the point, I fell in love with their highly intelligent and often poignant lyrics which set them far apart and far above most of their musical contemporaries.


PAWS hail from Glasgow, Scotland with members respectively from Tain (Highlands of Scotland), Edinburgh, and Glasgow. Their debut full-length Cokefloat! is due out Oct 9th on FatCat Records. Currently on a European tour with Japandroids, we are kind of shocked that they had time to answer our insipid interrogatives. But we are glad they did.

What's the most embarrassing band you loved as a kid?
Josh: Daphne and Celeste
Phillip: Spice Girls (but I'm not that embarrassed any more)
Matt: Deacon Blue

Unicorns vs. Narwhals? Who would win in a fight?
Unicorns, because they are literally the Scottish National Animal...wikipedia that shit if you don't believe.

What is the funniest thing that has happened to you on the road?
Phil popped an ollie over Brian Japandroid in Switzerland at the start of the tour...

Who has the worst van etiquette?
Phillip and Josh because they can't drive....

Who is in heavy rotation on your iPod?
Japandroids.

What is the worst fight over nothing that you got into with each other after being road weary and exhausted?
The only fight we have ever had on the road happened a couple of days ago in Rotterdam after the show. Waaaaayyyyyy toooo mucccchhhhhh whiskeyyyyy.