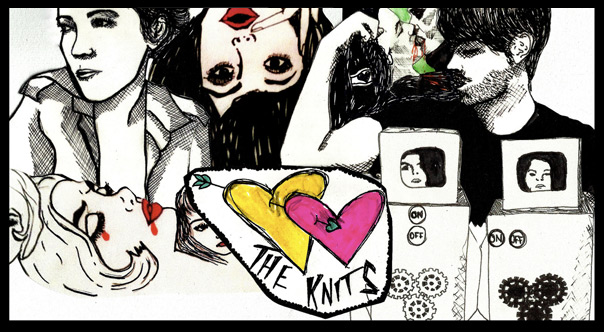 I ran across Australian garage heroes The Knits completely by accident. It was a slow music day and I was scouring other blogs looking for stuff to steal. Honestly, I am so fucking happy I did. I haven't heard such fun, amazing garage rock in a long, long time. If The Knits were in the US, I feel they would be destroying every stage they played on, reminding us how it's supposed to be done. Thanks to the wonder of the interwebs, I was able to metaphorically sit down with Brendan Walsh and got him to answer our highly ridiculous questionnaire.

What's the most embarrassing band you loved as a kid?
The Beaches Soundtrack by Bette Midler was a record that got many a spin when I was a little squid. Although, I'll still argue that her version of "Under the Boardwalk" crushes Rolling Stone's version into a pulp. Also, the proto-industrial track "Oh, Industry!" still scare me to my core.

What is the first record you bought?
Violent Femmes self-titled, which I still love today. There are not enough xylophone solos in music these days. "Gone Daddy Gone" has two.

Unicorns vs. Narwhals? Who would win in a fight?
Narwhals, reality beats imaginary. Also, their head boners look more dangerous than that of the unicorn.

What is the funniest thing that has happened to you on the road?
Reading Motely Crue's book, The Dirt, to each other in the back of the car was funny and informative. It is really quite an incredible story of the rise and fall of big haired girly-men. Also it has Pamela Anderson.

Who has the worst van etiquette?
Richie's butt.

Who is in heavy rotation on your iPod?
Hunx and his Punx are always getting a pounding on the ol' ipod. Al, from one of my other bands, Palms, just put me on to The Adolencents. Great band that play short, pointlessly angry punk songs. Fantastic! Also, Personal and the Pizzas have been getting a pounding of late. Perfect mix of humour and tough rock 'n' roll.

What is the worst fight over nothing that you got into with each other after being road weary and exhausted?
Constant arguments over food stops are exhausting, yet necessary. We need to find the most disgusting and satisfying road food possible.