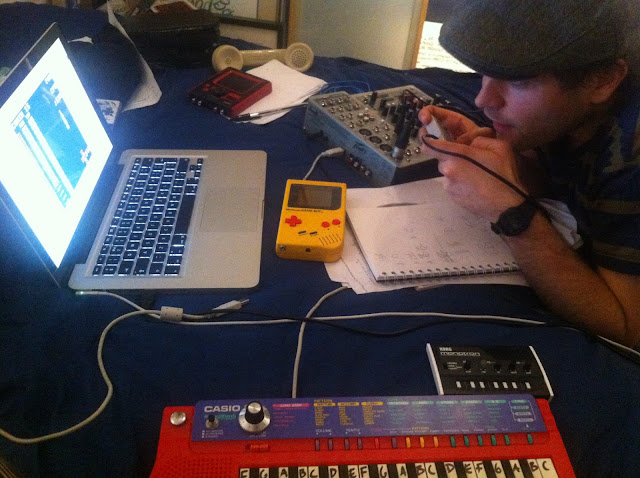 Fulhäst is my 8-Bit idol! Always entertaining, his decidedly lo-fi electronic wizardry full of bleeps and bloops, fuzzy guitars, and casio beats is accompanied by terribly clever lyrics. Fulhäst just released a pay what you want single on Bandcamp (see below) and is prepping a new 10" record called Broken on Fika Records! All this on the heels of last years cassette release Down the Deuce. Despite all the hullabaloo surrounding a new release, Fulhäst still had time to sit down with us and answer some highly suspect questions.

What's the most embarrassing band you loved as a kid?
Fulhäst: I've almost had immaculate taste in music. The first music I remember listening to was a cassette with songs by the Smurfs in Swedish. I must have been around four or five. It was called 'Smurf Party in Smurf Land' and was really good. I wonder what happened to it. There were loads of good songs on there. I remember one about lemons. I can still hear it in my head. Maybe I should do a cover of it? I even managed to find it on youtube – (http://youtu.be/ILDa0tTWDOs?t=1m) Anyway, when I started school I got into Twisted Sister AND Depeche Mode. I guess, then when I was eight or so, something went a bit pear-shaped, but I do maintain that was a good thing. I developed a bit of an obsession with a Swedish pop band called Style. They were amazing (proof here. This video rules: https://www.youtube.com/watch?v=AMJ4obVsABk) This lasted for several years. Can't quite remember how or why it ended, but somehow that turned into Guns N Roses, to Nirvana and punk when I was about 14. Since then I've done a fair bit of dabbling in twee indiepop, but I always come back to punk…it's where my heart is. Short answer…I'm not embarrassed about loving anything. Oh, apart from maybe The Offspring.

What is the first record you bought?
Fulhäst: There are different first records, no? Like, the first LP I was given as a kid I think was Herrey's – Diggi Loo Diggi Ley. This is a seriously amazing record and the title track will melt your face. I even managed to find an English so you can enjoy the majestic lyrics (https://www.youtube.com/watch?v=Ybs39cu21iw). The Swedish one is even better though. Worth investing in some language courses for even.  I got my first CD the same Christmas I got my first CD player (maybe in 1992 and it was a compilation by this legendary Swedish punk band, Ebba Grön (https://www.youtube.com/watch?v=Ya6z54IHdu0)

Unicorns vs. Narwhals? Who would win in a fight?
Fulhäst: I don't know what a narwhal is and that sounds like a really stupid thing to google, so I'm going to say unicorn. It would probably be able to stab a narwhal to death with its horn. Unicorns are cool.

What is the funniest thing that has happened to you on the road?
Fulhäst: Well, at the time it was the most horrendous experience, but in hindsight it's rather amusing. It was during the Moustache Of Insanity days. It involved me being hideously hungover and trying to vomit standing up in an extremely dirty and miniscule bus toilet on a bumpy road. It is actually pretty fucking difficult to vomit standing completely upright AND try to hit the toilet bowl at the same time. I don't recommend it.  Then, to make things worse, when I pushed the flush button everything just kind of sprayed back at me, covering me in loads of stinky chunks. That's when I realised that the tap didn't work L I had to sheepishly return to my bus seat covered in puke. Bill, my bandmate, was very impressed. Another funny thing was when we played in Vienna, Austria, and this really drunken girl kept grabbing the microphone  off the stage and screaming that we were "commercial bullshit" (in a strong Austrian accent…so imagine a young female Arnie)…which is something I've never been accused of. After the show, she came up to say she liked us.

If you could relive your prom, what song would you want to slow dance to?
Fulhäst: Hmmm. As in relive it and a song from  those days? Maybe Bryan Adams "(Everything I Do) I Do It for You." If I had to pick a modern song, hmmm…I don't know. It's been a loooong time since I slow danced. Maybe "A Stone" by Okkervil River. I always liked that song. Can you dance to that? I don't know. Do people even make slow dancey songs these days? What do the kids slow dance to? I'm so old.

Who is in heavy rotation on your iPod?
Fulhäst: I go through phases…but this year so far has been very heavy on The Blow, The Mountain Goats, Mr. T Experience, Lefty Loosie, Nana Grizol, The Ergs! Martha, Los Gatos Negros, T-Shirt Weather and Molly Nilsson. I played with a girl called Olive Anne last week and she was incredible, so I've been listening to her a lot this week.

What is the worst fight over nothing that you got into with each other after being road weary and exhausted?
Fulhäst: Well, since I'm now a 'playing-on-my-own person' (I fucking hate the word solo-artist) I just have to deal with myself all the time, which can actually be quite annoying. It's hard to escape yourself and I can be hideously indecisive, I get really restless and annoyed easily. When I was in a band (Moustache Of Insanity) I would still say it was an oh so horrible experience in Newcastle. We got to the venue way too early in the afternoon and started drinking heavily. Many hours later, when we finally got on stage we were both really drunk and had a proper argument on stage and it kind of lasted throughout the whole set. Nothing really worked, we played like shit and we were just really pissed off with each other. Not fun. 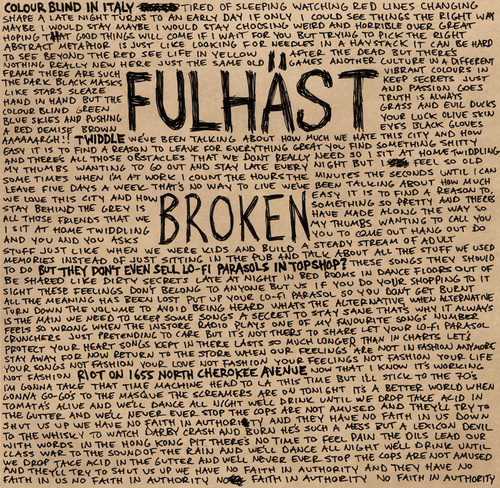 Labels: broken, down the deuce, fika, fulhast, Fulhäst, moustache of insanity, what do you see