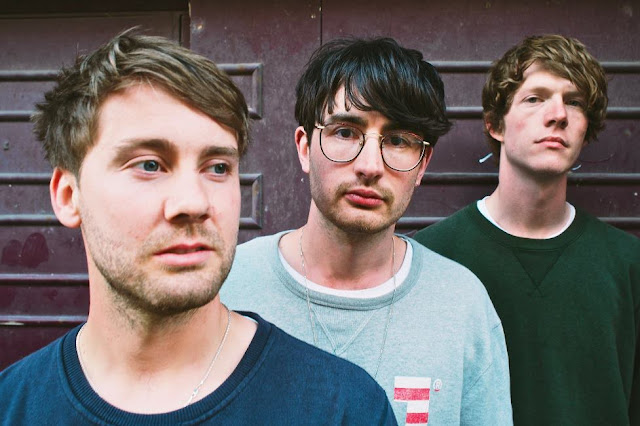 I can't stop listening to UK trio TRAAMS. Seriously. It's a problem. They haven't even officially released their debut LP Grin yet and I am hooked. Grin comes out September 24 on FatCat, btw...Thankfully, despite all the busy work and shows and whatnot that surround a new release, two of the TRAAMS bandmates agreed to answer our highly dubious questions!

What's the most embarrassing band you loved as a kid?
Stu: I really loved Madness, I had all their singles on video tape and used to watch it endlessly. I first saw them in a episode of the young ones where Rick asks the band, "Do you know summer holiday by Cliff Richard?" and Suggs replies, "You hum it and I'll smash your face in." I thought they were so cool.
Adam: Probably Limp Bizkit? I'm not that embarrassed about it though. They're very good at what they do.

What is the first record you bought?
Stu: Do the Bartman - the Simpsons. It's written and produced by Michael Jackson . I got it on 7" from Woolworths. The first proper album I bought was Parklife by Blur.
Adam: Americana by the Offspring. I bought it from a little chef, when I was 10.

Unicorns vs. Narwhals? Who would win in a fight?
Stu: Unicorns, they're mythical aren't they, don't mess with a mythical creature. They'll fuck you up.
Adam: Depends if the fight is on land or water doesn't it? I'd go for narwhals though. They exist, so they're already winning.

Who has the worst van etiquette?
Adam: Stuart.
Stu: Me . I wanna say one of the other two . But it's me

What is the worst fight over nothing that you got into with each other after being road weary and exhausted?
Adam: Padley gave us a telling off once for not playing tight enough. It was one against two, and we got owned.
Stu: We once had a argument over hair wax.