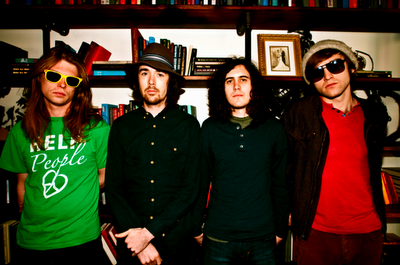 If you have been reading the blog or listening to the radio show at all, you know I am a huge fan of Philadelphia band Cheers Elephant. On May 8th they released the fantastic album Like Wind Blows Fire. "Leaves" is one of my favorite tracks from 2012 thus far. Reading over their press materials, I giggle as so many reviewers try to define them as "this" or "that", "x" or "y". The ones that say they are a mixture of "this and that" are maybe a little closer. But the truth is, trying to define Cheers Elephant's sound is a futile exercise. They are so versatile, so wonderfully diverse, that it is best just to sing along and forget trying to pigeon hole them.

Having previously toured the North East and Mid West exclusively, Cheers Elephant just wrapped up a massive tour expanding everywhere East of the Continental Divide, including SXSW this spring. The band has set their sights on the West Coast and Europe, but in the meantime, they have been keeping themselves busy with tons of shows and events in the Philadelphia area. Thankfully we were able to catch up with bandmates Derek Krzywicki and Jordan del Rosario while on hiatus (Roberto Kingston and Travelin' Mat were too fast for us and escaped) and got them to answer our seriously ridiculous questions.

What's the most embarrassing band you loved as a kid?
Derek: I liked Meatloaf when I was very young. Aside from that I was into some terrible pop punk bands when that was a new thing in middle school.
Jordan: Chumbawumba

What is the first record you bought?
Derek: First album I ever bought with my own money was Offspring's Ixnay on the Hombre.
Jordan: Alanis Morissette Jagged Little Pill

What is the funniest thing that has happened to you on the road?
Derek: There are so many memorable moments that it's hard to pick one. We've recently taken to making video parodies of each other on smart phones. You know, like they do on Conan O’Brien, where you take someone's face and remove the mouth so that you can talk for them? That sort of thing.
Jordan: "Losing" all the merch then finding it under the seat at the end of tour.

Who looks the best in drag?
Derek: Well, considering the hair, I'd say of Kingsly. However, I think I look pretty good in drag, as you can see on our website.
Jordan: King

Who is in heavy rotation on your iPod?
Derek: Don't really own any music. It's mainly Spotify for me. With that said, I've recently been on a Spiritualized kick.
Jordan: Wilco, War on Drugs, Beach Boys

What is the worst argument over nothing that you got into with each other after being road weary and exhausted?
Derek: Andrew, our manager, and Kingsly fought over a particular commodity I can't speak of. It's probably still a sore topic.
Jordan: Who's keef is in the marajuana grinder?