I will have to admit a bit of a bias towards Projekt A-ko. I have been following the music of these crazy kids from Glasgow, Scotland for at least 13 years. Those in the know might remember Fergus Lawrie, Elaine Graham, & Ian Graham from their hugely popular previous band Urusei Yatsura (in the US, they were released simply as Yatsura). The music of Projekt A-ko still contains the high energy, fun loving spirit of Yatsura, but it is beautifully tempered by years of experience and the natural musical maturation process. The result is a truly magical collection of songs that only seasoned indie rock veterans can deliver.


Recently, Projekt A-ko released a fantastic full length CD Yoyodyne. Yoyodyne is the name of the secretive and possibly malevolent corporation in Thomas Pynchon’s book ‘The Crying of Lot 49’. You can preview many of the tracks in the player above. You can also download some MP3s to check out for yourself here: Free Projekt A-ko MP3s! 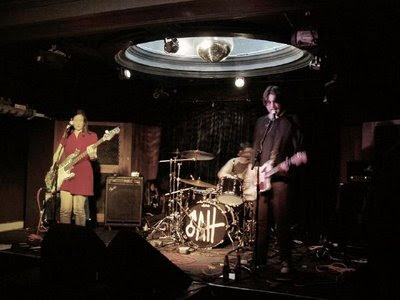 We caught up with Fergus and Elaine via the internet and convinced them to answer some of our highly suspect questions!

Viva: What's the most embarassing band you loved as a kid?
Fergus: Steeleye Span, still got a soft spot for them.
Elaine: My parents had a collection of those Top of the Pops albums with the saucy record sleeves and the dodgy cover versions. I didn't know they were cover versions for years and thought it was a band. That's pretty embarrassing.

Viva: Who smells the worst in van after a show?
Fergus: I do. I always sit as far away from myself as possible.
Elaine: Ian, no question. But then he is usually driving so it's best not to mention it or you could get left behind at a service station. 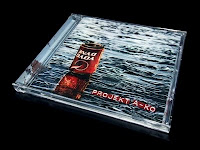 Viva: If Eiko Magami invited you to the Graviton High School prom, what song would you most want to slow dance to?
Fergus: Joe Le Taxi by Vanessa Paradis, just to maximize that kitsch ‘80s vibe.
Elaine: Little Trouble Girl by Kim Gordon/Kim Deal

Viva: What's the funniest thing that has happened to you on the road?
Fergus: Our dressing room got robbed in New York. That wasn't particularly funny, in fact we were very stressed out. We went back to the hotel room after the show and drank vodka while Ian phoned his insurance company in the UK. It was a bad line and whoever was handling the call wasn't used to Scottish accents. Ian kept on having to shout and repeat himself. Eventually they asked him to spell his name using call signs. He was having an increasingly hard time being understood and coming up with words for letters and when he got to the 'G' in Graham he said 'G for Gnome'. You had to be there.
Elaine: I once saw a woman with an accordian fall in a hole back stage at Pheonix festival. What a brilliant noise.

Viva: What other band names did you seriously consider before going with Projekt A-ko?
Fergus: None, it was a no-brainer once we found out about the connections between the Urusei Yatsura and Projekt A-ko films.
Elaine: I can't really say as we still might use them one day.

Viva: Who's in heavy rotation on your iPod?
Fergus: 'Yoyodyne' by Projekt A-ko, embarrassingly. I've just got a random play guy so I cleared everything else off to listen to the album when I got the final cut and I've yet to find time to put anything else back on.
Elaine: My iPod is busted so there are ghost tracks on it that I can't delete which fill up a load of space, luckily for me these are mainly from Sonic Youth's Sonic Nurse album.

Viva: What was the worst fight over nothing that you got into with each other after being road weary and exhausted?
Fergus: Can dolphins eat crisps. You know, trying to open the packets with flippers would be pretty tricky.
Elaine: We excel at these kind of arguments. Take your pick:
What is the best way to eat a chocolate eclair (the sweet not the cake)?
Cricket - what's the point?
Posters - is it ever acceptable to have a bands big fat faces on them?
Top of the Pops - don't get Ian started..... 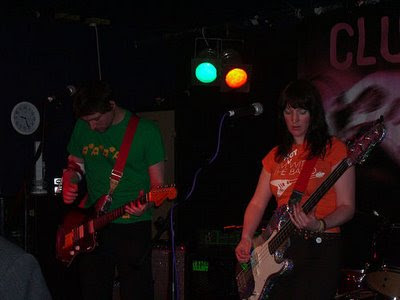 Tags: projekt a-ko yoyodyne
Posted by Viva Indie! at 5:58 AM