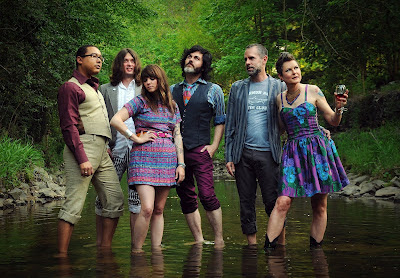 Charlotte based psychedelic garage monster Snagglepuss has just released its fourth full length album Doing Music. These legends of the local music scene are having a record release party May 5th at the fantastic NC music venue Snug Harbor, and then, after 13 wonderful years of entertaining crowds in the South East, calling it quits. Snagglepuss is comprised of Hope Nicholls (yes, that Hope Nicholls from Fetchin' Bones, Sugarsmack, and more...) on Vocals and Sax, Charlotte hero Scott Weaver on Vocals and Trumpet, Amy Kay on Guitar, Michael Anderson on Sax, Darrin Grey on Bass, and Aaron Pitkin (Nicholls husband and Fetchin' Bones/Sugarsmack bandmate) on Drums. You will not find a more energetic, fun filled live performance anywhere. We are sad to see them go.

Though busy getting prepared for their farewell show/record release party, we caught up to Snagglepuss bandmates Amy and Darrin and used some fairly offense tactics to get them to talk. Thankfully, they succumbed to the pressure and agreed to answer our highly dubious questions.

What's the most embarrassing band you loved as a kid?
Amy: The Monkess. I used to wake up early on Saturday mornings and watch their tv show. which came on after this really weird show about alien abductions - which made a nice morning combo. More embarrassing would be the fact that I went to record store to meet them.
Darrin:The Bugaloos. Basically, I loved any kid's show or cartoon that featured a rock band.

What is the first record you bought?
Amy: It was a mini cassette single of Walk Like an Egyptian by The Bangles. You had to buy a mini cassette player to listen o it. It was the 80's.
Darrin: My Grandmother worked at a music store for a short time, and I bought the single Why Can't We Be Freinds? by War there. Nana was cool.

Sasquatch...or Yeti? Who would win in a fight?
Darrin: Chupacabra would beat them both!
Amy: I'm with Darrin. Chupacabra trumps all mythological creatures.

What is the funniest thing that has happened to you on the road?
Darrin: I have a notoriously bad sense of direction, and once, it took me and Amy about 4&1/2 hours to get home from a gig in Winston Salem.
Amy: Throwing up at every rest stop between Atlanta and Charlotte on the way home from a show. At least I didn't throw up in the van, which is why I can laugh about it now.That was the last time I drank Jaegermeister.

Who has the worst van etiquette?
Amy: We are always really excited to go on road trips, so it's always a good time.
Darrin: we are actually quite civilized. As long as Chaka (a.k.a. Scott) has a tub of nacho cheese, he's very docile.

Who is in heavy rotation on your iPod?
Darrin: The Warlocks, Jonathan Wilson, The Clash
Amy: Roots of Chica and an unknown group of lowland Bolivian musicians that I got from a cab driver there.

What is the worst argument over nothing that you got into with each other after being road weary and exhausted?
Amy: Taco Bell or McDonalds. That's about the only deviation from happy-go-lucky.
Darrin: Argue with these guys? Not a chance. There's a lot of love in this room...