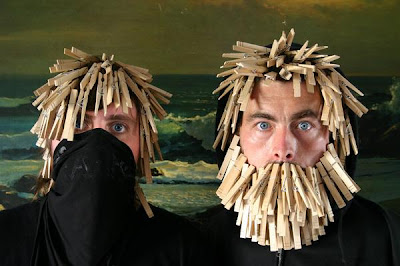 I have never seen a live band quite as impressive as the San Francisco duo Tartufi. Lynne Angel and Brian Gorman build incredibly complex songs in front of their audience piece by piece, one instrument at a time using delay pedals, loops, and a little bit of magic, until there is a thunderous wall of sound that threatens to bring the building tumbling down. Two people do the job of a five or six member band, and they do it better. 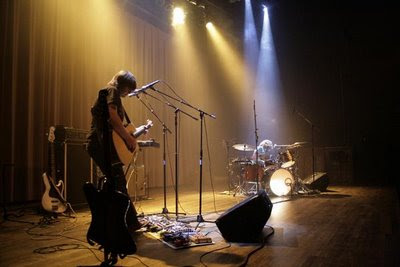 Veteran road warriors, Tartufi always seems to be on tour. Fortunately, we caught them at home resting up and preparing for their new album release Nests of Waves and Wire (due out in June 2009 on Southern Records) and yet another US and European tour. They graciously gave us a special sneak preview of the record. Check out the song “Dot Dash” below.

While Brian and Lynne were distracted doing more important things, we jumped on the chance to ask them to answer some highly dubious questions. Here’s what they had to say:

Viva: What's the funniest thing that has happened to you on the road?
Lynne: Every day is a joy with my Brian. Each second tinged with humor, each moment .... hilarious!
Brian: One day we almost went to jail, Lynne broke her toe, we slept at a gas station, got caught in an ice storm, our windshield broke, we ran out of gas, walked miles for gas in freezing rain, and the clerk at the gas station tried to pretend that they didn't have any gas cans though one was in plain sight. That was pretty funny the next day.

Viva: In your amazing live show, the two of you play and loop back the parts of a 5 or 6 piece band. Has your gear ever betrayed you in the middle of a set?
Lynne: In the middle, at the beginning, at the end, while loading out, while loading in, the gear seems to think the gear is in charge and needs to be reminded every once in a while that one little snip and the gear is magically transformed into the ger.I would yurt the shit out of my amp if need be.
Brian: Every show we are like paratroopers jumping and hoping our shoots open. Often they don't and we do as much repair work as we can while still playing. You should see Lynne pass me replacement cables while she is shredding on her Firebird.

Viva: What other band names did you seriously consider before going with Tartufi?
Lynne: Unfortunately we had no such luxury but we have always wanted to start a side project called Cheese Sandwich.
Brian: If we had given any thought to our band name we would have most likely ended up with a long winded name with too many words. Thankfully we ended up with something that sounds like nonsense to everyone but our friend the Itailians.

Viva: A wise man told me never to print anything the drummer says. Is this true?
Lynne: (Nervously eyeing question #7) Heh heh!Everything my drummer says is worthy of being printed!E-v-e-r-y-t-h-i-n-g. Including these gems: "That dog look like it gon' do that cat." and "Ass-bastard! Where's My Hat!? [wearing hat]". Nuff said. Print it!
Brian (the drummer): Viva is very handsome. (Will the "wise" words of a man or the ego of the blogger in chief prevail?)

Viva:What was the worst fight over nothing that you got into with each other after being road weary and exhausted?
Lynne: We don't fight silly goose! We get frustrated over space restrictions while setting up on stages that are small. We need coffee / tea sometimes. Or a sandwich. We need a little space here and there. We do not always 100% agree with things that fly out of the other one's mouth, especially regarding interpretive dance. But we do not fight about it! We simply give "the look" and later "the groin punch".
Brian: I second that. Lynne's my great friend and best bandmate forever (BBMF). 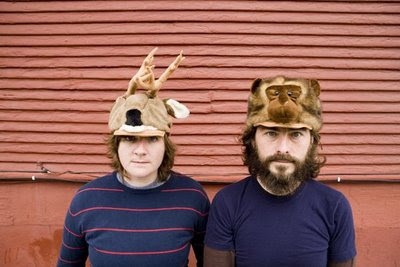 Watch all 3 parts of this amazing live video of Tartufi @ The Bottom of the Hill!