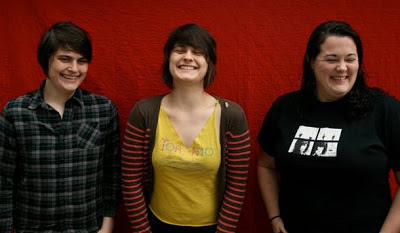 I first met Wet Nurse at a show in Charlotte, NC at the World Famous Milestone Club. They were on tour for their 2012 release Daily Whatever. I was smitten immediately. I mean where else are you going to find an all female garage pop band fronted by identical twins and powered by a ridiculously rockin' dynamo of a drummer? That's what I thought.

I caught up with the charming trio of Nina Chaplin, Susana Chaplin, and Vanessa Brewster at their homes in Orlando, FL via the interwebs. Thankfully they were willing to take a few moments to answer our highly dubious questions!

What's the most embarrassing band you loved as a kid?
Vanessa: Terrible pop fan. S Club 7.

What is the first record you bought?
Nina: Daft Punk - Discovery

Unicorns vs. Narwhals? Who would win in a fight?
Susana: Narwhal, dude. If it got that bitch in the water that unicorn wouldn't stand a chance!
Nina: Well one's land and ones water... So where would this fight be happening?
Susana: Well Unicorns also have special powers... So...
Nina: It's a tie.

What is the funniest thing that has happened to you on the road?
Nina: We almost stayed on a hardwood floor next to a dude in a Mexican wrestler mask passed out next to his blindfolded girlfriend. Yeah, Alabama's weird. And no. We didn't stay there.

Who has the worst van etiquette?
Susana: Me I have clothesplosion!
Vanessa: Soooo many shoeeees...

Who is in heavy rotation on your iPod?
Susana: We just listen to mix CDs people make us.

What is the worst fight over nothing that you got into with each other after being road weary and exhausted?
Vanessa: Fights over food, feminism and too much whiskey get us in trouble a lot! We fight like sisters though so it may look like we're about to rip each others faces off but we're really just blowing off steam.