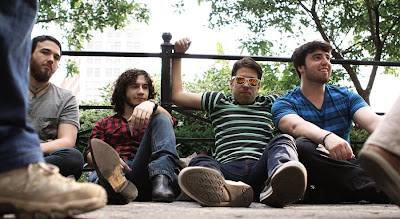 I am not even quite sure how to start talking about New Jersey band Boxed Wine. The best way I can describe their music is infectious, upbeat indie pop created by impossibly charming dorks. And I mean that as a total compliment. The first time I heard their track "Waste Your Time" I was smitten. I think I have listened and sung along to it at least a hundred times.

On May 21st, Boxed Wine is releasing their debut full length Cheap, Fun. We posted about their preview EP of the same name back in January. With all the hoopla and craziness surrounding a new album, we are pleased the guys had time to sit down with us and answer some highly irregular questions.

What's the most embarrassing band you loved as a kid?
Chris: Probably Vengaboys, but it was mixed in with a lot of 90s techno, especially Jock Jams comps…
Ralph: Van Halen, even the Sammy Hagar era. Mike: Milli Vanilli (and yes, I was devastated when the truth came out)
Steve: Chumbawamba, Give me a break I was 7!

Unicorns vs. Narwhals? Who would win in a fight?
Chris: It really depends on the setting… Narwhal in water, Unicorn on land.
Ralph: Unicorns because they don't exist and you can't kill something that doesn't exist. Other example: Santa.
Mike: Narwhal in reality, but if the unicorn had its special powers, it'd totally dominate.
Steve: The almighty Unicorn. Duh.

What is the funniest thing that has happened to you at a show?
Chris: Nothing. I thought about this for twenty minutes, and can honestly say that nothing funny has happened to me at any of our shows. I feel lame now.
Ralph: I was once approached by a girl with pink hair about halfway through our set. She grabbed me and asked me to dance with her during the next song. I told her I couldn't play while dancing so she left and I never saw her again.
Mike: I once invited two girls who were competing for my affections to the same show. Neither of them came, so I guess that's funny. Or sad. Yeah, definitely sad but funny. Steve: A drumstick went flying out of my hand, hit my drum, then came flying right back, nailing me in the head. *cue rimshot*

If you could relive your prom, what song would you most like to slow dance to?
Chris: "Fake Empire" - The National or "Montreal" - Kaki King or "Red Moon" - the Walkmen.
Ralph: "New York, I Love You but You're Bringing Me Down" - LCD Soundsystem
Mike: A slowed down version of "Girl You Know It's True" - Milli Vanilli
Steve: "My Girl" - The Temptations (Gotta go with a classic!)

Who is in heavy rotation on your iPod?
Chris: Theme Park, the Strokes, Locksley, Free Energy, the Plastics, Generationals, the Rapture, and the Virgins at the moment.
Ralph: Haim, LCD Soundsystem, and Katy Perry
Mike: Milli Vanilli, Gaslight Anthem, and Bruce Springsteen
Steve: Deftones

Who smells the worst after a show?
Chris: Mike
Ralph: Mike and Chris
Mike: Chris
Steve: The fans! Haha kidding, we don't have any fans.