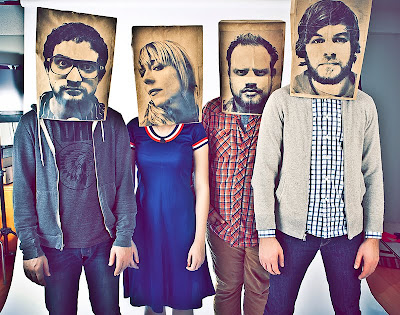 If you haven't heard of the FAWN before, you are in for a real treat. Their debut album Coastlines came out earlier this year and destroyed the CMJ Charts finding it's way into the Top 20 amongst heavy hitters like Beach House, Hot Chip, Ty Segall, and Japandroids. And, in truth, while I love all those bands, I would much rather listen to Fawn. Tracks like Pixels and Break it Off make you want to hit the repeat button on the iPod over and over and over again.

With a little help from our friends at Terrorbird, we were able to catch up with Fawn via the interwebs. Thankfully, band members Matt Rickle and Mike Spence had a few spare moments to answer our highly suspicious questionnaire.

What's the most embarrassing band you loved as a kid?
Matt: Michael W. Smith. Don't even bother looking it up.

What is the first record you bought?
Mike: Green Day's "Dookie." I was in fourth grade at a new school and felt really embarassed that I didn't know the lyrics to "Longview." Funny, transferring from public school to Catholic school inadvertently turned me onto that song.

Unicorns vs. Narwhals? Who would win in a fight?
Matt: No brainer. Narwhals win, because they are real human beings and unicorns are not.

What is the funniest thing that has happened to you on the road?
Mike: We ended up at some truck stop that sold these strange, gothic novelty household decor items. There was a set of dragon figurines playing instruments - like saxophones and keytars. And then, there was this gem. A gargoyle toilet paper dispenser, which our friend Ray - who was with us - bought as a keepsake. Brian Peters from Qui-Sci said it best: "Fecaemon - protector of your most private of papers."

Who has the worst van etiquette?
Mike: We navigated through the worst winter storm in history. There were times that we thought we were hallucinating because we had never seem such strange precipitation - like driving for miles through golf balls three feet deep. We thought we saw beams of light from a downed UFO. Turned out, it was a rest stop. Because we survived together, all sins of van etiquette are eternally forgiven.

Who is in heavy rotation on your iPod?
Matt: On Halloween in was Oingo Boingo's "Dead Man's Party" all day, but now it's back to Chris Cohen's "Overgrown Path," Wild Nothing's "Nocturne," and Tame Impala's "Lonerism."

What is the worst fight over nothing that you got into with each other after being road weary and exhausted?
Mike: We never fought about anything. Ever. Until those Taco Bell gift cards came into the picture.