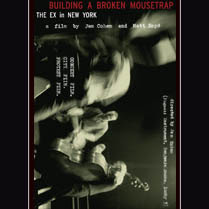 Hailing from the Netherlands, The Ex have been creating their own brand of experimental rock since 1979! 15 albums later, they end up teaming with Touch and Go on a DVD release Building A Broken Mousetrap. Admittedly, not having heard much from The Ex prior to the dvd, this next statement is coming from their press release: The Ex developed over the years into a melting pot of divergent musical styles. Noise, jazz, improvisation, and ethnic music have been interwoven under one unique umbrella: Ex-music. Discordant, highly rhythmic guitars and the rolling, almost African drumming style give the music of The Ex its special character.
I'm not so sure about the African drumming statement, but the music on Building a Better Mousetrap harkens back to the mid-90s when Math Rock was all the rage and more bands were fringing on the edge of experimentalism and crazy rhythmic syncopations. Songs like Dog Tree would have made all of these bands green with envy. This is a pretty interesting watch. It will be challenging to those who are more attuned to indie pop. But, for the more adventurous, this is a must have.
http://www.myspace.com/theexnl
http://www.theex.nl/