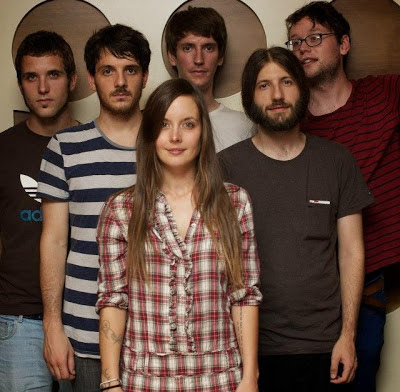 I have a total crush on the six adorable Spaniards that comprise the charming band Wilhelm and the Dancing Animals. Their brand of upbeat indie is so infectious, so entertainingly original that it is virtually impossible to listen and not fall in love immediately. Their album The War of the Species came out earlier this year on Origami Records and is a delight from start to finish!

According to their bio, Wilhem and the Dancing Animals started when the drummer of the band Antigua & Barbuda, Guille Fernandez, wanted a change in his musical career and decided to ask Helen Agreda to accompany him in a fresh new project. They were soon joined by four more musician friends (Kiko, Have, Iñigo, and Josh). I was lucky enough to catch up with Guille and Helen online. Thankfully, they agreed to answer our highly dubious questions.

What's the most embarrassing band you loved as a kid?
Helen: Take That
Guille: Il niño

What is the first record you bought?
Helen: Roxette: Joyride
Guille: Sepultura: Against

Unicorns vs. Narwhals? Who would win in a fight?
Helen: I've just googled narwhals, I didn't even know they existed! God! I would force them to become friends.
Guille: Narwhals. Unicorns don't exist.

What is the funniest thing that has happened to you on the road?
We were playing at a festival and Helen decided to slag the organisers off with a guy she'd just met: the organiser. We found out later.

Who has the worst van etiquette?
Josh (our bassist) for eating stinky salad bags.

Who is in heavy rotation on your iPod?
Helen: Lukestar
Guille: Blink 182

What is the worst fight over nothing that you got into with each other after being road weary and exhausted?
We are proud to say we have never ever had a fight. Cross fingers.

Labels: wilhelm and the dancing animals