It's really rare that I ever put a band's video up above the story about them. In this case, I wanted to make damn sure that you watched it. Honheehonhee's We Only Go is one of the most wonderful songs and equally wonderful videos I have seen in a long, long time. I kind of had a crush on these charming Canadians since I heard their album Shouts which came out last November. There is a love for life and a real sense of play that comes through in their songwriting. So many bands seem to have lost the idea that music is supposed to be fun. Honheehonhee gets it.


Honestly, I didn't know anything about Honheehonhee coming into this other than they were Canadian, look good naked, and they make great music. So, I set out to corner as many of the bandmates as I could and force them to submit to my ridiculous questions. Three members were too fast for me to catch. Thankfully, multi-instrumentalists and vocalists Greg Halpin and Matt Raudsepp were slow enough for even the most deformed zombie to run down. Here's what they had to say: 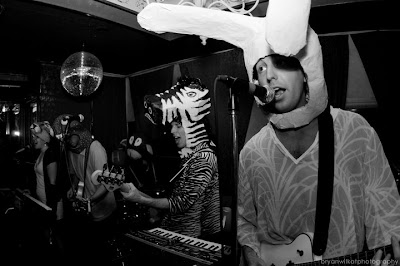 Viva: What's the most embarrassing band you loved as a kid?
Matt: The Tony Rich Project
Greg: Probably Hanson but I'm not that embarrassed; it doesn't get much better than when Taylor sings mmmbop.

Viva: What is the first record you bought?
Matt: My first CD was The Tony Rich Project. My first vinyl was the soundtrack from the movie "The Sting", bought at a garage sale.
Greg: I think it was two the same day, Pocket Full of Kryptonite and that 4 Non Blondes record (you know the one).

Viva: Who would win in a fight? Sasquatch... or Bigfoot?
Matt: I'll choose Sasquatch cause it's a cooler name. Bigfoot reminds me of the monster truck.
Greg: That's a tough one, Bigfoot's probably got a big kick but Sasquatch can Sasquash a mother f-er. Then you have to take into account the lay of the land and the rage factor. Who started this fight and why? If Sasquatch stepped on Bigfoot's toe then maybe Bigfoot would have more motivation. My gut tells me Sasquatch would take it but I wouldn't bet on it. Plus aren't they the same person?

Viva: What is the funniest thing that has happened to you on the road?
Matt: After crossing the U.S. border I accidentally left the trunk of the van open. We didn't even notice, even when a suitcase fell out on the highway. Luckily we stopped for gas right away and a nice old man had followed us to return the bag - my bag. I felt like a grade A moron.
Greg: We usually stay with one of our good friends when we play Toronto and we often invite as many people as possible to party back at her place after the show. Her roommate's a pretty sweet guy and doesn't mind (he usually joins in the festivities) but once he woke up with two strange men in his bed and so the next time the rule was no men can sleep in his bed (a pretty fair rule). Unfortunately for him, the next time we ended up inviting a total stranger from the bar who said he was stuck in Canada waiting on a visa on his way to Mexico. He ended up in the roommate's bed wearing just a t-shirt.

Viva: Who has the worst van etiquette?
Matt: Greg. When we're not touring, he leaves his sweaty gym clothes in the van so that when we next use it it smells like salt and vinegar.
Greg: Matt. He doesn't really like to drive and he stinks.

Viva: Your video for We Only Go shows people playing in the snow naked. Anyone lose a nipple to frostbite?
Matt: The dog. But luckily she has so many nipples that nobody noticed, least of all her.
Greg: No! This was an obvious concern of ours before the shoot so we hired volunteers to blow on our nipples between takes. There were actually twice as many people off screen as there were on - one person per nipple.

Viva: Who is in heavy rotation on your iPod?
Matt: Parlovr
Greg: Parlovr

Labels: honheehonhee, shouts, we only go