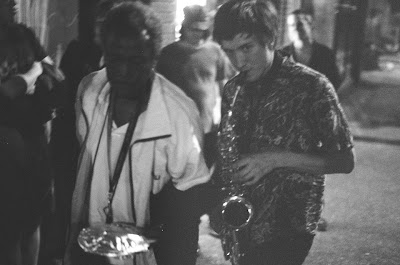 Iji is the genius indie pop creation of Seattle's Zach Burba. Charming, quirky, and completely endearing, his music will make even the staunchest indifferent hipster wiggle their hips to the infectious sounds. Given that Iji is releasing a new album Soft Approach on March 1st and gearing up for a monster month and a half tour of the East Coast, we are surprised that Zach had a free moment to answer our highly ridiculous questions.

What's the most embarrassing band you loved as a kid?
I really don't find anything that I listened to as a kid to be embarrassing. If anyone reading this wants to be embarassed for me over the fact that I used to really love Hanson and Savage Garden then that is fine, but last night I was driving home from Olympia and heard "Truly Madly Deeply" on the radio for the first time in years and was just awe struck by how awesome of a song it is.

What is the first record you bought?
I'm a young buck so the first albums that I had were on Cassette. I recall listening to Jock Jams and The Good Burger Soundtrack a lot in my bedroom with my little brother, but the first album that I actually went out and bought with my own money was "Let's Face It" by The Mighty Mighty Bosstones. I use to listen to that one in elementary school on my walkman.

Unicorns vs. Narwhals? Who would win in a fight?
I would prefer to remain a voice for peace among animals. Pass.

What is the funniest thing that has happened to you on the road?
I can't really say that this is the funniest thing that has happened to me on the road, but, a few years ago I was touring with my friends Dogbreth from Pheonix, and we somehow got booked at an incredibly strange dive bar in Austin Texas. We showed up pretty late and found the place totally empty except for a small gathering of around 6 or 7 drunk metal heads having a bbq in the back yard. The club owner suggested we play out back since there was already a little crowd and we thought that was a great idea. We're down with metal heads. As soon as we started playing though these dudes started yelling and throwing things. It went on for a while and we just tried to have as much fun as possible playing our set to the 4 or 5 people that came to see us, while dodging beer cans and folding chairs. When one of the dudes yelled "Play Some Slayer, Pussies," Tristan from Dogbreth got on the mic and starting telling a story. "You know I was driving down the highway once and I got pulled over for speeding. The cop noticed that I had some metal cd's on my dashboard and asked me if I liked Slayer. I told him 'ofcourse! Slayer rules', and he told me he would let me go with a warning this time, but the joke was on him because I actually think Slayer is the worst fucking Metal band of all times. Slayer is COP MUSIC!" I couldn't believe that he said that to these huge dudes and they started getting really angry just stomping around and yelling. I was a little worried we were going to get whooped while unloading when one of the dudes approached us, but all he said was "Can I get a ride with you guys to Houston?" We let him know that there was no room and then we went and bought some wild, heavenly pizza slices down the street.

Who has the worst van etiquette?
Me.

What is the worst fight over nothing that you got into with each other after being road weary and exhausted?
Kevin from Math the Band and I once fought for a really long time on tour about whether or not Evil Dead 2 was supposed to be funny. I remember both of us being genuinely mad at each other about it.