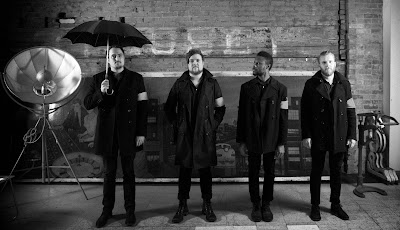 I first heard of Wildlife when we received their fantastic video for Sea Dreamers off their debut release Strike Hard, Young Diamond. I instantly fell in love with their epic, soaring sound. Earlier this month, Wildlife released a brand new LP, On the Heart, and I just had to know more about their lives. Thankfully, despite being incredibly busy with all the events surrounding a new release, Derek Bosomworth (bass) and Dwayne Christie (drums) had time to answer our highly dubious questions!

What's the most embarrassing band you loved as a kid?
Dwayne: Marky Mark and the Funky Bunch. I wrote down and memorized all the words to "Walk on the Wild Side" and "Good Vibrations".

What is the first record you bought?
Derek: I remember getting the Weird Al tape that had the Jurassic Park song on it. I was super into that. Probably also Bat Out of Hell.

Unicorns vs. Narwhals? Who would win in a fight?
Derek: Well realistically unicorns would probably fight with their hooves more than their horn. So in effect they have 2 methods of attack over the Narwhal. However if the battle was at sea, there would be an obvious advantage to the Narwhal. Pretty simple stuff really.

What is the funniest thing that has happened to you on the road?
Derek: Once at a truck stop Graham threw a Gatorade bottle at Tim and hit him right in the face. Right square in the fucking face!

Who is in heavy rotation on your iPod?
Derek: We just had a 30 hour drive back from Texas two days ago and we listened to a TON of Radio Lab. Its such a good time passer and makes me feel like I'm learning something. Everyone should listen to Radio Lab. The episode on Parasites is amazing!

What is the worst fight over nothing that you got into with each other after being road weary and exhausted?
Derek: We don't fight very often. We maybe bicker about flatulence or waiting for people who forgot they had to pee at the rest stop. There was a very late night argument in Vancouver over the key to the hotel room which got pretty heated. But that was mostly alcohol influenced.